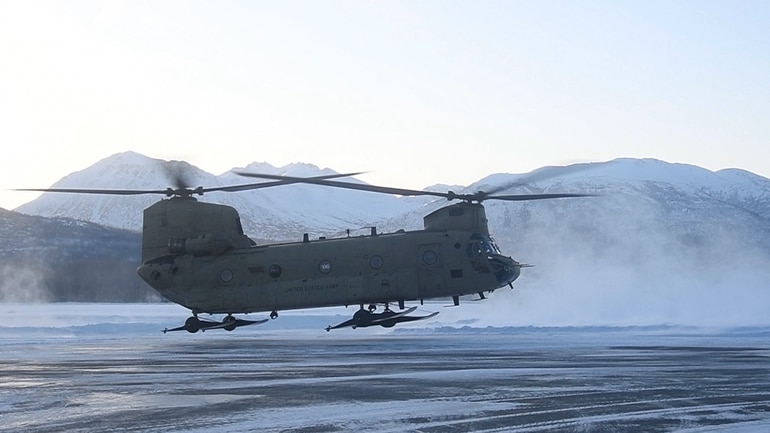 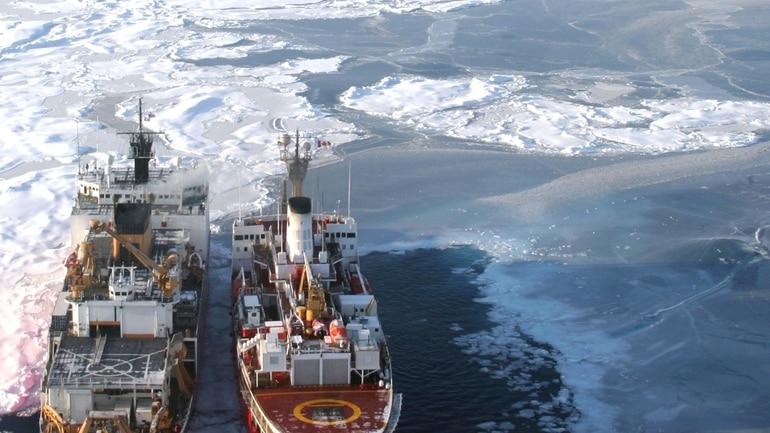 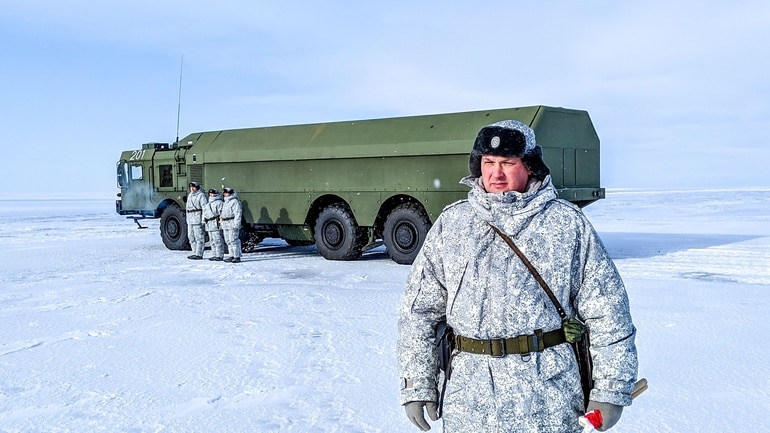 A Russian officer, right, and soldiers stand next to a special military truck at the Russian northern military base on Kotelny island, beyond the Arctic Circle on April 3, 2019. The Russian military base dubbed the “Northern Clover” on the island was built to serve as a model for future military installations in the Arctic. (Maxime Popov/AFP via Getty Images)
4 of 14 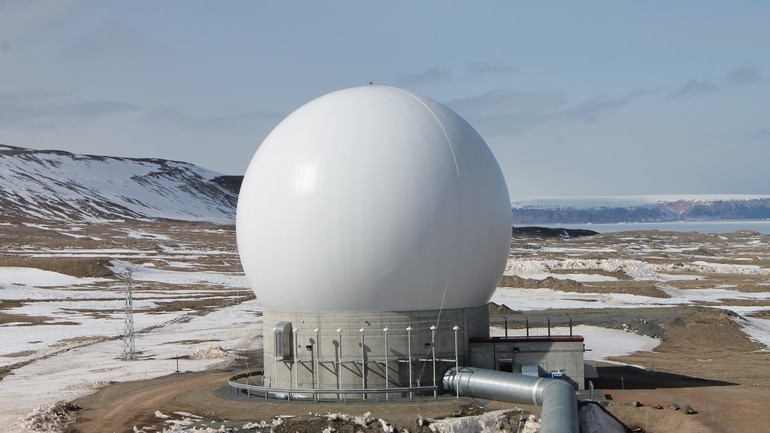 Detachment 1, 23rd Space Operations Squadron gained operational acceptance of the seventh and final Remote Block Change antenna at Thule Air Base, Greenland, on July, 26, 2016. The antenna, designated as POGO-Charlie, represented some of the latest telemetry, tracking and command technologies in the U.S. Air Force. (U.S. Air Force)
5 of 14 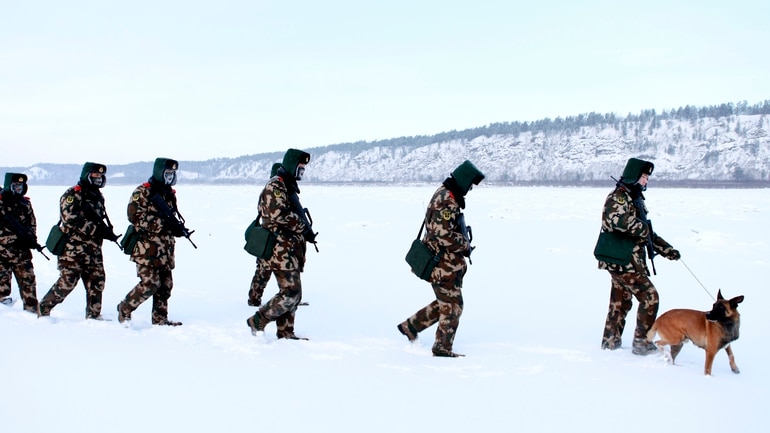 Chinese paramilitary police border guards train in the snow at Mohe County in China’s northeast Heilongjiang province, on the border with Russia, on Dec. 12, 2016. Mohe is the northernmost point in China, with a subarctic climate. (STR/AFP via Getty Images)
7 of 14 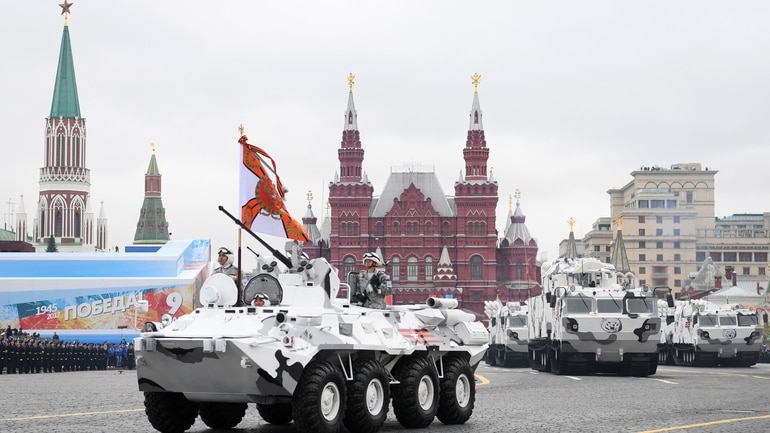 Russian TOR-M2 tactical surface-to-air missile systems and Pantsir-SA air defense systems are decked out in their Arctic colors as they ride through Red Square during a military parade in Moscow on May 9, 2017. (Natalia Kolesnikova/AFP via Getty Images)
9 of 14 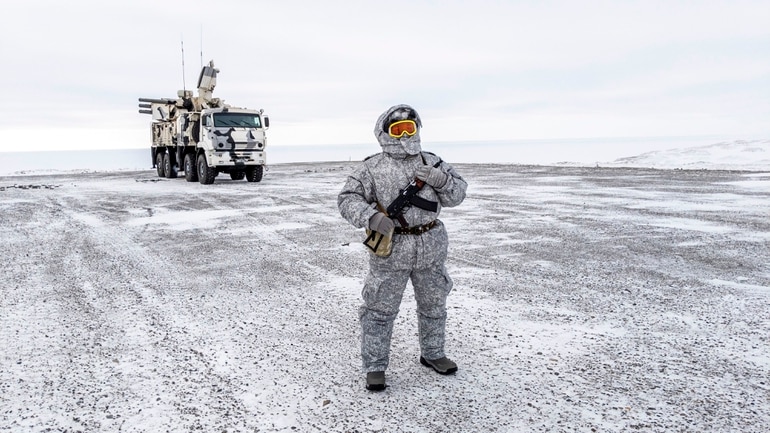 A soldier holds a machine gun as he patrols the Russian northern military base on Kotelny island, beyond the Arctic circle on April 3, 2019. The Arctic is a strategic region for Russia as it continues to strengthen its presence with the new perspectives offered by global warming. (Maxime Popov/AFP via Getty Images)
10 of 14

British and Irish soldiers with their military vehicles pause to check equipment and rest on Oct. 10, 2018, in Rotterdam, Netherlands. They were on their way to join other NATO forces for Operation Trident Juncture. Norway has long lobbied NATO partners to increase troop numbers as Russia has built up its military capacity in the region, especially the Kola Peninsula inside the Arctic Circle. (Dean Mouhtaropoulos/Getty Images)
11 of 14 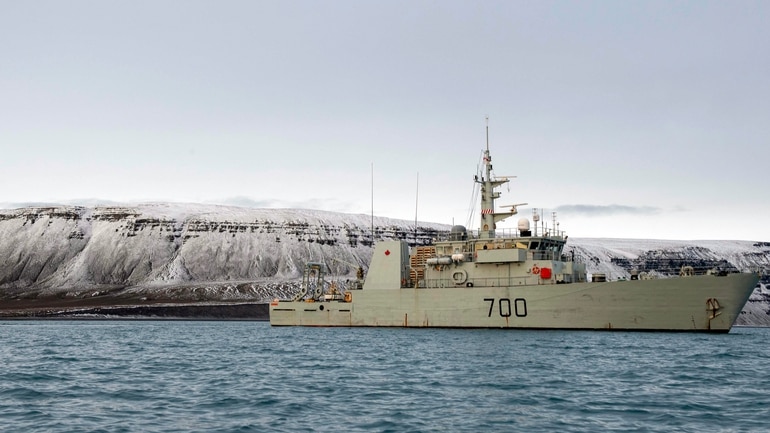 A Finnish F-18 Hornet departs from Jokkmokk Air Base during a joint exercise between the air forces of Finland and Sweden over the Arctic Circle towns of Jokkmokk in Sweden and Rovaniemi in Finland on March 25, 2019. (Jonathan Nackstrand/AFP via Getty Images)
13 of 14

Project scientist Nathan Kurtz and senior support scientist Jeremy Harbeck walk on their way to survey an iceberg locked in sea ice near Thule Air Base on March 26, 2017, in Pituffik, Greenland. NASA’s Operation IceBridge was flying research missions out of the base and other Arctic locations. IceBridge team members took the rare opportunity to survey sea ice near the base from the ground. Thule Air Base is the U.S. military’s northernmost base located some 750 miles above the Arctic Circle. (Mario Tama/Getty Images)
14 of 14 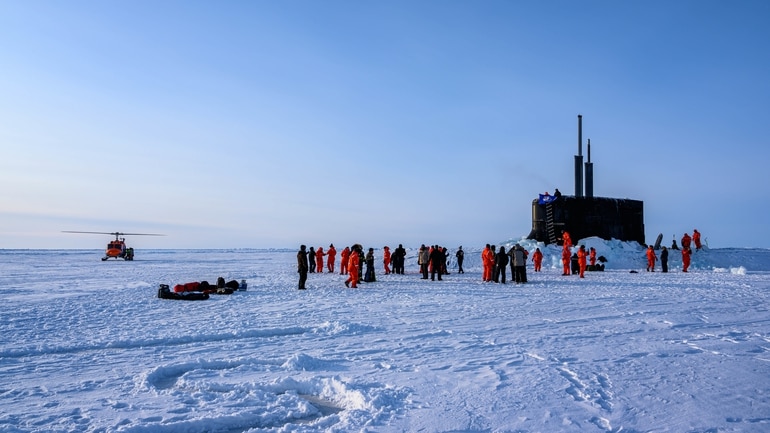 The crew of the U.S. Navy’s Seawolf-class submarine Connecticut enjoys ice liberty after surfacing in the Arctic Circle during Ice Exercise 2020 on March 7, 2020. ICEX is a biennial submarine exercise that promotes interoperability between allies and partners to maintain operational readiness and regional stability, while improving capabilities to operate in the Arctic environment. (MC1 Michael B. Zingaro/U.S. Navy)

One day before the U.S. election, Russian President Vladimir Putin attended the commissioning of a new diesel-electric icebreaker ship, the Viktor Chernomyrdin, which is the most powerful non-nuclear icebreaker in the world. Just two weeks prior, another ceremony announced the entry into service of an even larger and more formidable icebreaker, appropriately named Arktika.

Over the past couple of years, NATO has undertaken major naval forays into the Barents region and also put on large-scale exercises in the High North. Senior U.S. military officials and diplomats, moreover, have suggested that that Russian (and Chinese) activities in the Arctic constitute a major threat that requires a robust U.S. military response in the form of new deployments and new capabilities. U.S.-Russian military tensions have been increasing in nearly every geographic domain over the last several years, but with a new administration entering the White House, certain assumptions about “great power competition” deserve much closer scrutiny.

At first glance, the brand-new, nuclear-powered Arktika-class Russian icebreaker could be interpreted as stark evidence of the Kremlin’s determination to build up its capabilities to control the “roof of the world.” It is now the largest and most powerful icebreaker in operation. According to a report from the Russian-language newspaper Izvestiya, Arktika already sortied to the North Pole in early October, breaking through 3-meter ice en route.

Russia is the only Arctic country that produces nuclear icebreakers. But these extraordinary ships do not come cheap, with a price well in excess of $1 billion per hull. It is important, moreover, to see that the new Russian nuclear icebreaker is not a “one off” of purely symbolic significance. Two more of these ships, Sibir and Ural, are launched already. A fourth ship in this class, Yakutia, is now being built, while the fifth hull, Chukotka, will soon be laid down. In addition, preparations are underway in the Russian Far East to start building an even larger class of nuclear icebreaker.

These hulking ships are the basis for building the Northern Sea Route, or NSR. That route shaves off several thousand kilometers of navigation for ships plying the essential route from Asia to Europe. Notably, Chinese investment in the “Polar Silk Road” through the Yamal gas field has contributed substantially to both the viability of the NSR as well as to cleaner skies in China, since the Middle Kingdom has continued its timely shift from coal to cleaner-burning natural gas.

To be sure, there has been a military component to Russia’s emergent strategy for the Arctic. The Kremlin created a new Arctic command back in 2014. Some new bases have been established, and older bases have been upgraded. Bombers have recently made visits to some of these remote bases. A new military “combat icebreaker” class was launched in St. Petersburg back in fall 2019.

On the other hand, it must be admitted that Russia has about 24,000 kilometers of Arctic coastline. For decades, this remote wilderness has been neglected and only thinly defended. One can hardly accuse the Kremlin of “aggression” when its small deployments have all been to its own territories. These deployments, moreover, can also be justified as quite necessary for the safety of ships plying the NSR or to respond to an environmental emergency. And it is far from clear that a few hundred soldiers bunking in an Arctic Trefoil and staring at walruses on Alexandra Land are a threat to anyone in particular. Nor can American strategists argue with a straight face that ships navigating the NSR along Russia’s Arctic coastline and complying with Russian law to submit information regarding navigation plans somehow constitute a threat to the liberal trading order.

By giving us your email, you are opting in to the Early Bird Brief.

True, Russia-China military collaboration in the Arctic must be watched closely, but that cooperation remains hypothetical at present and will likely remain so, unless there is a deepening of the “New Cold War.”

American strategists must recognize that all those billions in Russian funds allocated to fund unarmed icebreakers could also have been spent on Russian aircraft carriers or on its submarine force. Rather, the Kremlin has taken a page from China’s book and pursued commercial profits and development over military superiority. Such commercial (vice military) impulses are to be encouraged.

U.S. President-elect Joe Biden should reevaluate relations with Russia in an environment free from partisan rancor. In doing so, he should look well beyond puerile issues regarding stolen emails, social media absurdity and opposition research shenanigans.

By contrast, three genuinely grave issues should be on the Russia agenda for the incoming president: revitalizing arms control; striving to reach basic agreement on regional security hot spots from Libya to Belarus to North Korea; and emphasizing the imperative to address climate change.

It is on the latter issue specifically that Washington should be pressing Moscow. In that regard, the new president-elect should include a cooperative agenda for the Arctic that allows for development but that aims primarily to safeguard the environment. Bending “great power competition” toward great power cooperation will not only help solve the world’s most pressing problems, but also enable the prioritization of healing and also nation-building at home.